It is just so “springy” outside!

Green is popping up absolutely everywhere; including the fresh green of the grass slowly waking up like a newborn after a muddy winter-sleep. And this particular hue of fresh green really is the perfect background colour for the first batch of spring flowers – bright yellow daffodils and, my personal favourite, the old-fashioned violet-blue primulas (see the right hand side of the window box in the photograph above).

While the weather is still fairly chilly and windy outside, it is nothing that a thick puffa coat can’t block. And the (sometimes!) blue sky definitely offers tempting glimpses of the English summer ahead. 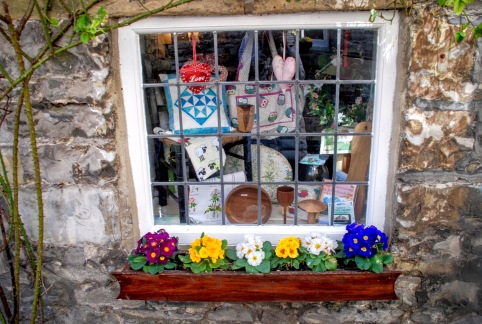 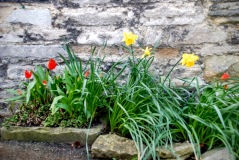 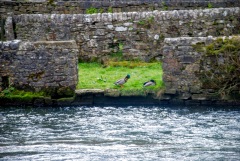 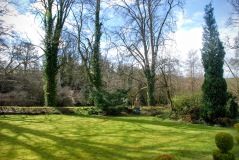 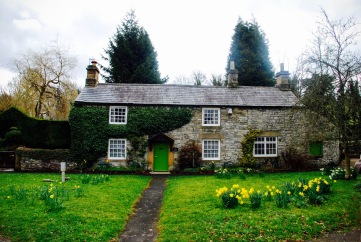 We spent the long weekend at my parents house and yesterday we drove to the gorgeous Derbyshire village of Ashford-in-the-Water. Even though the village is so close to where I grew up, it was the first time I had ever visited – and what an Easter treat it was! A breathtakingly beautiful place.

The village itself is built alongside a small stretch of the River Wye in the Peak District. Traditionally, lead mining was one of the main industries in the area, with Ashford-in-the-Water being a centre up until the late 19th century. However the village is somewhat better known for Ashford marble – a unique black limestone first quarried in 1748. When polished, it provides a perfect background for mosaic and inlaid patterns in jewellery and clocks.

And the main fixed “attraction” of the village? This medieval sheep wash bridge; originally a packhorse bridge, a stone sheep wash was later added to the bridge (see the left hand side of the photograph):

Traditionally lambs were placed in the pen on one side of the river (above left), then the ewes were unceremoniously thrown into the river on the other side so that they would swim to their young. As they did, the poor ewes were pushed underwater by the shepherds so as to clean the ewes’ fleece before they were sheared!

The practice of washing sheep in this way apparently stopped in the early 1960s when a monetary bonus stopped being given to washed wool. See the photograph below however for a better idea of how the sheep washing was historically carried out – this picture was taken in the 1970s at a re-enactment ceremony.

Whilst on the subject of sheep, at one point whilst my husband and parents were chatting at the bottom of a picturesque street, I ran up this beautiful “secret” natural hedgerow tunnel. I found the walkway so enchanting and enticing that I just had to know what lay at the top….

…..And the answer? A rather ram-shackle small holding with lambs, cockerels and an incredibly grumpy ram. 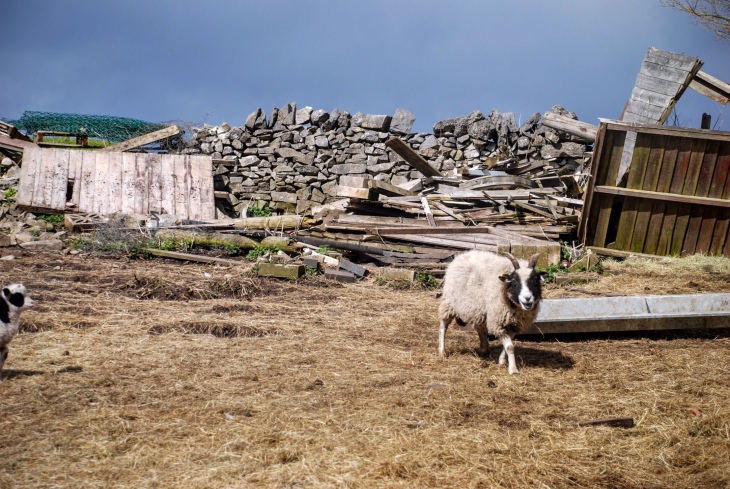 As you will see from the photograph above, Mr Ram really didn’t want me on his patch: I felt a country-style turf war brewing. His angry low-pitched rumbled-grunt (akin to a big beltch!) sent out a very clear marker that he didn’t want me around. As you can see, the walls to the field weren’t necessarily the most secure (!) and the sky started to turn an ominous stormy-grey, so I swiftly made my exit back down the path to the others.

But I plan to go back very soon, hopefully for the “well dressing” ceremony.

“Well dressing” is a summer custom practised in rural England in which wells, springs or other water sources are decorated with designs created from flower petals. The custom is most closely associated with the Peak District of Derbyshire and Staffordshire, including the village where I was brought up. But more about this in a separate post that I plan to write at the end of May. (FYI, I am really excited about writing that blog as it is such a beautiful and, I suppose, unique ceremony – the origins of the tradition are said to lie in pagan tradition of giving thanks for the purity of the water drawn from certain wells during the period of the Black Death!)

Enjoy the rest of the long weekend!

Enjoying life and the crazy beautiful things in it. View all posts by Lexa